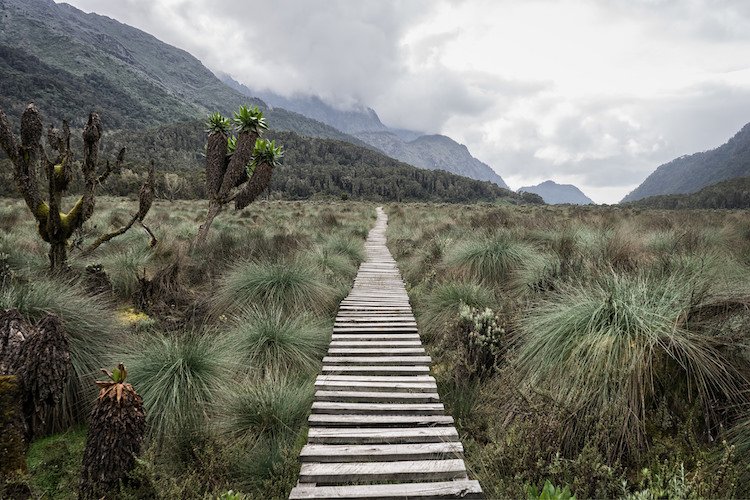 Previously referred to as the ‘Rwenzori Range,’ the Rwenzori Mountains are a mountain range situated in Eastern Equatorial Africa. They are along the border between DRC and Uganda. In addition to supporting glaciers, these mountains are among the sources of the famous Nile River.

The Rwenzori Range became part of the famous Rwenzori Mountains’ National Park back in 1991. This park covers approximately 996 square kilometers of rugged mountain terrain. In 1994, it was proclaimed as a UNESCO World-Heritage Site to protect the area’s flora and fauna and its overall natural beauty.

Facts at a Glance

Naming & History of the Rwenzori Mountains

These mountains were named ‘Rwenzori’ by Henry M. Stanley, a European explorer. He called this range after an African native word that means ‘rainmaker.’ And, it’s indeed rainmaker as rain feeds the dense foliage and falls on the Rwenzori Mountains for up to around 350 days each year.

The Mountains of the Moon

The Rwenzori Mountains are popularly nicknamed ‘Mountains of the Moon.’ Claudius Ptolemy, an Alexandrian geographer, was the first person to use the name on a map. Before then, the mountains were speculated to be a source of the famous Nile River. It was later discovered that, indeed, melting snows from the Rwenzori Mountain Range feed various tributaries of the Nile River.

This range is estimated to have formed 3 million years ago. While they are not volcanic, these mountains result from uplifted blocks of crystalline rocks such as gneiss, quartzite, amphibolite, and granite. This uplift resulted in the division of Obweruka (a paleolake) and the formation of three present-day Great Lakes, namely Lake George, Lake Albert, and Lake Edward.

While the range measures only 120 kilometers long, it boasts among the most diverse ecosystems worldwide. Here, the vegetation tends to vary with altitude changes, within a short distance from each other in the cold of the mountains’ glacial ice and the tropical jungles’ heat. The Rwenzori Mountains have five different zones of habitation, hence generating an amazing world of biodiversity.

Different habitat zones in the Rwenzoris

At the base, this zone teems with animals like zebras and elephants. This zone reaches up to around 1,676 meters (5,500 feet). Above it is the Rainforest, reaching up to 2,286 meters (7,500 feet). Here, you’ll come across giant ferns, lianas, and wild banana trees. The grasslands are perfect for a family safari holiday for viewing the incredible plant and small animal species that do not involve hiking steep summits.

This type of forest is among the unique habitats you’ll ever walkthrough. This zone reaches up to 2,895 meters (9,500 feet). Bamboo, a rare kind of grass, grows up to almost 3 feet in a day here. In just two months, it can easily reach over 100 feet!

It’s found above the Bamboo Forest, extending up to almost 3,650 meters (12,000 feet). It’s a land filled with dripping heather trees, covered with lichen and going as high as 40 feet. These trees loom over a comprehensive ground cover of liverwort and mosses. They’re considered a close relative of the low-shrub that grows along the Scottish moorlands.

It extends up to almost 4,419 meters (14,500 feet). In the lower sections of this zone, you’ll come across plants unique only to the African Alpine zones. Such include the giant lobelia and the tree groundsel. The Alpine zone’s upper sections mainly comprise rocky terrain that’s covered with brown mosses and black lichens.

Above 14,500 feet, you’ll find the highest peaks of the Rwenzori Mountains. These peaks are permanently snow-capped and wrapped in storm-swept glaciers. This zone extends up to almost 5,109 meters (16,762 feet).

Wildlife in the Rwenzori Mountains

There are over 200 bird species, too, including the Olive pigeon, Alpine swift, Dusky Flycatcher, Rwenzori Olive Thrush, Rufous sparrow hawk, and Lanner Falcon. Others include the African Lammergeyer, Verreaux’s eagle, Green White-eye, Dartmouth Sunbird, Bamboo Warbler, and Western lemon dove, among many others.

If you love hiking, then you’ll undoubtedly want to consider the 5,119 meters-high, snow-capped ‘Mountains of the Moon.’ They offer just the unique trekking and hiking experiences you’ve likely been looking forward to.

The Rwenzori Central Circuit Zone offers plenty of opportunities for hikes and nature walks. Such include walks through the Kichamba communities to the Karangura Ridge, trails up to the Buraro Chimp Forest and Lake Mahoma, and hiking through Bwamba Pass to the Bundibugo area.

The Bwamba Pass is a 1,500-metre high trek atop the steep Northern Rwenzori Ridge. Here, the Abanya community will lead you over the mountains and isolated villages to reach the Bamboo Forest. From this point, you’ll be able to enjoy superb views of the Rift Valley.

The communities of Turaco and Ruboni offer opportunities for guided forest walks just outside the Rwenzori Mountains National Park. You can follow the iconic River Mubuku and enjoy Fort Baker & Portal Peaks’ scenic views as you hike up to around 2,300 meters above sea level.

By the early twentieth century, the Rwenzori Mountain Range was still hugely unexplored and its peaks unclimbed. During then, Uganda was a large region filled with dense forests, malaria-infested swamps, and lakes. Luigi Di Savoia, an ancient Duke of Abruzzi, began pondering about climbing the Rwenzori Mountains.

Luigi had previously reached the highest peaks of Mount Saint Elias (Alaska). He departed for Uganda with his scientific expedition in 1906, accompanied by J. Brocherel, C. Ollier, and J. Petigax. He was able to reach the loftiest peak, climbing 5,109 meters high. Luigi di Savoia named this peak ‘Margherita’ after an Italian Queen who had financed his expedition.

Gear Up and Visit the Rwenzori Mountains (Uganda)

The Mountains Range has quite a lot to offer, from unique nature walks, amazing cultural encounters, exploration of exotic plants, wildlife scenery, trekking, hiking opportunities, and fantastic birding chances. Hiking these mountains provides a rewarding and exhilarating Uganda safari experience but one that must be planned appropriately. As with any other tour experience in the wild, the key to a memorable hike in the Rwenzori Range is good preparation.

You should pack reliable rain gear, a sleeping bag(s), gloves, a warm hat, heavy socks, and gaiters during any season. Porters will help carry your food and heavy equipment, thus allowing you to take other essential luggage. It’s pretty difficult to predict how high altitude will affect your body. For that reason, you must play safe and carry along a well-stocked first-aid kit, especially if it’ll be your first time to ascend thousands of feet.

Consider packing medications like OTC indigestion pills, ibuprofen, and cough drops if the hikes get unpleasant. Besides, visiting your doctor before embarking on treks in the mountains might be helpful. He/she can help you establish your limits and ascertain you don’t have undiscovered ailments or lingering illnesses which could hinder your hike up in the mountains. More importantly, be ready to turn around in case you start feeling unwell.

What Tribes Live in the Rwenzori Mountains?

These ethnic groups live together in the Bundibugyo District, on the Rwenzori Mountains’ western slopes. You can also find them in the Butalinga District in DRC. The most commonly used dialect is Lubwiisi, a Bantu language close to Runyoro, Runyankole, and Luganda.

Their popular cultural sites include Bujumila (for Bangulu clan), Kiroghoji Waterfalls (for Basu clan), and Semuliki Hot Springs (for Bamaaga clan). All three communities practice Kubhemba, a ritual where they prepare and serve sumptuous to their ancestors, appeasing them in celebration or calamity times.

The Basongora are the second-largest tribe in Kasese. They largely occupy the lowlands of the Rwenzori Mountains, concentrated in areas like Ibuga, Muhokya, Hima, Katwe, Nyakatonzi, and Hamukungu.

Most of the regions mentioned above are close to various water bodies. That’s because the Basongora people are mainly pastoralists, hence attracted to places endowed with water. However, modernity has made them embark on farming, too, but only for subsistence. Lusongora, their dialect, is closely related to Runyakitara and Rutooro.

These are a majority ethnic group in present-day Kasese. They speak Lukonjo, divided into pidgin Lunyarwenzuru and Lukonjo. They believe Kithasamba, their god, resides in the snow-capped peaks of the Rwenzori Mountains. Their popular cultural sites include Isaya Mukirane’s mausoleum, in the Ihandiro Sub-County.

Before, the tribe predominantly occupied the Rwenzori slopes. As a result of inter-tribal clashes, the Bakonjo sought refuge in the mountains and realized the Rwenzoris were a reliable protective shield against external attacks. To date, the group still forms a ring around the Rwenzori Range. Over time, some have descended to occupy the lowlands, though.

These are a minority ethnic group in present-day Kasese. They live in the plains and lowlands of the Rwenzori Mountains. The various places they occupy include Mukunyu, Bugoye, Muhokya, and Kinyamaseke. Lunyabindi, their dialect, is a mix of Rutooro and Runyoro. The group practices mixed farming, grazing short-horned cattle, and growing crops such as bananas, beans, potatoes, cassava, and millet.

With Lukonzo as their local dialect, this group occupies Ruboni and Mihunga, peaceful farming villages situated along the Rwenzoris’ foothills. Their day-to-day activities mainly comprise tending to livestock and growing crops. You’ll also come across blacksmiths, traditional healers, storytellers, and basket weavers in the Ruboni community.

The region is around the Equator and, consequently, doesn’t experience summer and winter weather extremes. It remains attractive throughout the year, despite the change in seasons. It barely causes any significant changes to the range’s fauna and flora.

The Rwenzori Mountain Range has two wet seasons and two short dry seasons. The long wet season starts in March and ends in June, while the short wet season occurs in November. During the wet season, the mist masks the Rwenzori Peaks. Although that helps form snow caps and glaciers at the higher summits, it can also make route-finding and hiking considerably tricky.

One of the dry seasons begins in July and ends in October, while the other falls between December and February. These are the best times to go to the Rwenzoris as they are the driest and warmest months. However, you can ideally expect some rains in such times, although they occur less frequently and often at night.

Bear in mind that the climate around the Rwenzoris is unpredictable. The periods discussed earlier may vary from a year to another. At times, the rains may come early or come late. They may be mild or torrential.

All hikers should experience the Rwenzori Mountains. The hiking is incredible, the wildlife is amazing, it is an all-around thrilling experience. 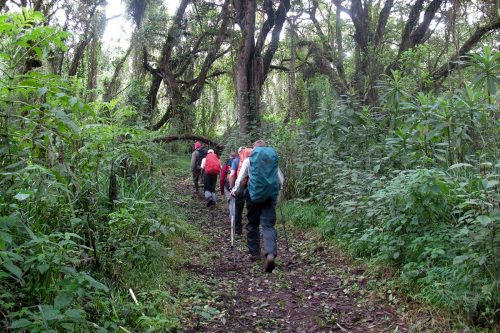 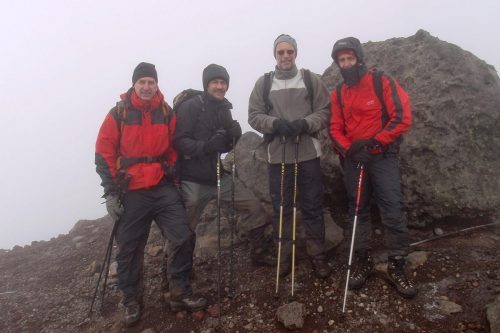