An East African Big 5 safari trip places you in close proximity of Africa safari’s famous ‘BIG FIVE’ game animals; lion, leopard, rhinoceros, elephant, and Cape buffalo herds. Get up-close to a hunting lion or leopard, drive among a herd of elephants of buffaloes and track the gentle white rhinoceros on foot.

An East African Big 5 safari trip places you in close proximity of Africa safari’s famous ‘BIG FIVE’ game animals; lion, leopard, rhinoceros, elephant, and Cape buffalo herds. Get up-close to a hunting lion or leopard, drive among a herd of elephants of buffaloes and track the gentle white rhinoceros on foot. 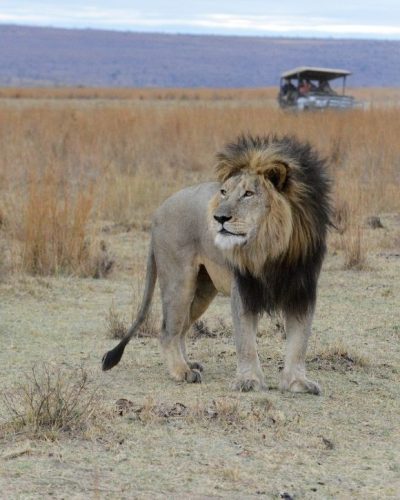 An Africa safari trip is incomplete until you marvel or pull out your camera and take a picture of at least one of the famous members of the Africa BIG 5 game animals. The big five include the lion, leopard, rhinoceros, elephant, and Cape buffalo. They were popularized by imperial trophy hunting adventures mostly because of their difficulty to hunt on the open savannah plains. Thankfully, today we hunt the big 5, not to kill, but marvel at their outstanding and majestic beauty with a camera instead of a gun.

A traveler can easily see Africa’s big 5 in all East Africa’s destinations today. East Africa, the pioneer of African safaris, is home to a massive range of wildlife species spread out on thousands of protected animal parkland. Most notable is the Serengeti and Masai Mara, where the great annual migration occurs every year. Kenya and Tanzania have the best national parks for a BIG 5 safari trip. However, Uganda and Rwanda provide great alternative safari attractions to complement a big five safari without leaving the destination’s borders, like gorilla trekking in the misty mountain jungles. The largest and most imposing African carnivore, the lion is the most sought after member of the Africa big 5. The African lion is the most sociable of the large cats, living in loosely structured prides of typically five to 15 animals. Lions have special cultural significance in most countries on the continent that enjoy a reputation as ‘king of the beasts’ and are popular symbols of royalty, strength, and bravery.

These big cats are not born into a rank; they are egalitarian. Which means they don’t have a permanent social hierarchy. One male may be dominant over the others, but that can change at any time. Lion society is also matrilineal. The females hold the territories and stay with the pride into which they’re born.

Lions can be easily seen on a Big 5 safari trip than any other cat. Early morning or evening safari game drives in any of the major East African savannah parks are sure to bring you close to a hunting lion pride The leopard is the most elusive, and also the smallest, of Africa’s big 5 animals. Leopards are sneaky, naturally shy, elusively nocturnal,  and harder to spot. These big solitary cats haul large kills, such as zebra or antelope, into tree-tops to eat alone, in peace.

These impressively shy cats can be distinguished from cheetahs by their rosette-shaped spots and a more robust build, and their preference for wooded or rocky habitats. On a Big 5 safari trip, you can virtually see leopards in all habitats which offer adequate cover and are present in most East Africa savannah parks and forest reserves.

Africa’s only wild African buffalo ox species is an adaptable and widespread creature that lives in large herds on the savanna and smaller herds in forested areas. The African buffalo (Syncerus caffer) or Cape Buffalo is the most dangerous of all African game species, especially if wounded or solitary. Its reputation has placed it on the Africa big 5 animals recognized worldwide.

African buffalo are huge, even-toed ungulates, characterized by their stocky build and heavy horns. Horns are present in both sexes, and they are not ridged. The buffalo is easily distinguished from other animals because of its dark black color and its characteristic horns, smaller and lighter, curving outward, backward, and upwards. Ears are large fringed with hair and hang below massive horns. Identified by their characteristic horned snouts, rhinoceroses are universally recognized by their massive bodies, stumpy legs, and either one or two dermal horns. In some species, the horns may be short or not obvious. They are renowned for having poor eyesight, but their senses of smell and hearing are well developed.

The southern white rhinos remain, mostly in southern Africa. On a big 5 safari trip, a selection of places in Uganda and Kenya provide rhino tracking on foot.

The African Elephant is the largest big five safari animals and perhaps the most enduring symbol of nature’s grace and fragility. It is also one of the most intelligent and entertaining to watch on a big 5 safari game drive. A fully-grown male elephant can weigh a whopping 6300 kilos, and even the smallest adult male rarely dips below 4000 kilos, which is way more than twice the weight of an average family SUV. Females are usually just over half the weight of the male.

Savanna elephants are large enough to change the landscape, pulling up trees to make grasslands, dispersing seeds, and increasing biodiversity. These massive creatures can silly be seen by travelers on any big 5 safari trip in most savannah safari parks in East Africa. 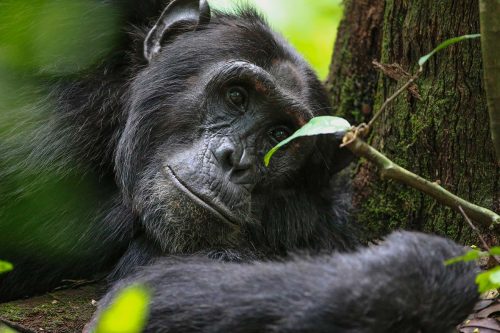 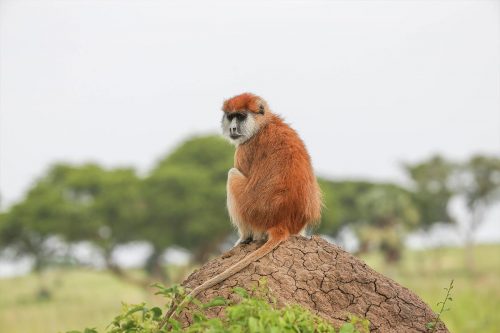 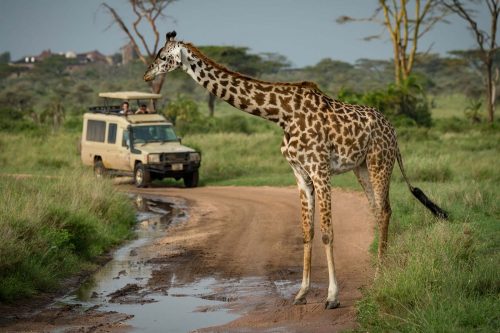 What Our Guests Say About Us

Sarah B.
Travel in Covid times- 2.5 unforgettable weeks In November 2020, we travelled Uganda as a couple in a 4*4 Jeep. Considering the difficult time we are all in, we were especially happy about the level of service we experienced. If you have a negative COVID-19 test beforehand, you can travel Uganda with no problem. During our travel we felt very safe: all staff wore masks, if you enter buildings (Lodges, Banks etc.) or parks you have to sanitize your hands and your temperature will be taken. All in all, we felt safer than in Europe - as everybody was very considerate about our health. But let`s talk about the experience: - We travelled the north (Kidepo national park) which we highly recommend. The amount of animals (mammals, birds) is spectacular - Furthermore we did Murchinsons, Queen Elizabeth (incl. Ishasha sector), chimpanzee habituation experience and Nkuringo- where we tracked Gorillas in the Rushaga sector - This trip was unforgettable. Our guide made sure we enjoyed it to the fullest. He was very professional and could answer all our questions about animals, history and the country - As tourism is low at the moment, we were even more spoiled by all staff in all lodges, which made our experience even more special We highly recommend to travel Uganda now, as it is one of the most amazing experiences you can have in your travel life. About Nkuringo tours: - From the booking (where we could give our inputs and wishes), to the payment, the guide during the trip to the COVID test to the end, we experienced a highly professional service - We want to acknowledge especially, that if problems arised, they solved them in a professional and efficent manner. For example, we had a car break down (due to the rainy season some roads were very bad). We still arrived in our lodge that day in the evening and were able to proceed with a new car the next day. We didn`t experience any negative impact to our travel, even if this could have been a major issue - All in all, we highly recommend to work with Nkuringo Walking Safaris to experience this beautiful country the fullest

kwaAlaska
Great walk and canoe trip. Don’t miss out on this unique experience. Our guide with Nkuringo Walking Safaris, Richard was excellent. We had an informative and unique walk down the mountain from Kisoro to Lake Mutanda. We walked through villages and saw families actively working their farms. Children along the way were delightful. The walk is easy. Once we arrived at the lake we got into canoes with Boatman David and his son. They took us across the lake ( a very big lake) to Chameleon Hill Lodge. The dugout canoe was very comfortable with padded seats to lean against. You can help paddle or not. It was a peaceful and beautiful tour of the lake. Highly recommended adventure.

Victoria V
Amazing 7 day - Gorilla and Chimp tracking and QENP. My husband and I had a week vacation, which is not a lot given all the things we wanted to do/see. Nkuringo organized our trip to make the most of this week. The trip was flawlessly organized. Time-management was perfect. They were flexible and accomodating, all our needs were met and we felt listened to, it was a truly customized experience. Our guide (Darrick) was amazing, he was knowledgable, very informative, and very flexible too! He also went above and beyond to make sure we experienced the things we were showing interest on. We are tuly happy with Nkuringo and will recommend to friends and family.

Tom R
An incredible way to see Uganda For part of our trip we trekked through the mountainous region of Uganda, from Gahinga to Bwindi, via Lake Mutanda and Nkuringo. Throughout this part of the trip we were accompanied by our wonderful guide (muhavara) Richard. Richard knew so much about pretty much everything - the local animals, plants and trees, the communities the country's history and culture. He's funny and friendly and looked after us incredibly well. I really recommend this way of exploring the region.

Bill G
Best experience I ever had Our trip was actually organised by Wild Frontier Safaris and we spent 3 days at Buhoma Lodge and walked into see the H group on the second day. It took me one and half hours but some of the walking was not difficult. When I arrived it was just so wonderful I was almost in tears, it was one of the most amazing hours of my life, 14 gorillas who just went on with their lives and occasionally came right up to us. Two hours of a steep climb to get out,

Ask an expert a question or request a trip quote

Please make sure you have your facemask on when in contact with animals, especially the endangered creatures. Without a negative PCR Covid Test, you’ll not be allowed into the destination. You’ll spend most of your time in open spaces away from human crowds, with that there’s minimal to no infections of the COVID virus. See out COVID-19 Travel Updates.

Get a 100% refund on cancelation 40 days before your trip. Your big 5 safari booking can be extended up to 12 months ahead with no extra fees, in case of any emergency (based on accommodation availability). Reservations are accepted after we receive a 30% deposit on the trip and the full payment for gorilla tracking and chimp tracking permits for each tour participant. For more details on our booking terms, please read our Terms and Conditions.

or send an email to [email protected]