The latest report reaching us from the Nkuringo Sector in the southern part of Bwindi Impenetrable National Park says that the Nkuringo gorilla group has 14 members, with 2 silverbacks, 2 blackbacks, 5 adult females, 1 sub-adult, and 4 babies, under Silverback Rwamutwe‘s powerful leadership. Tabu (the second silverback) takes the second-in-command role.

Mama Christmas (Adult Female) — left the group to join her son (Christmas)’s leadership nearby when her son Rafiki died.

Mountain gorillas have become one of Africa’s most remarkable conservation success story with current numbers in Virunga and Bwindi regions shooting close to 1063 mountain gorillas in the wild and out of the critically endangered zone. Poaching is one of the greatest hindrances to keeping those numbers multiplying. We believe the death of Rafiki will mark the end of poaching in Bwindi Impenetrable Forest, and together with the community leaders, we are going to focus on sensitizing the communities to the value of conserving wildlife for future generations.

The Origins of the Nkuringo Sector

Gorilla tourism started in Nkuringo in April 2004 after the habituation of the group that started in 1996. The group ranges to the Kashasha river valley below the Nteko ridge and was often found foraging close to the park’s indigenous populations. This was regarded as detrimental to the animals’ health and well-being as they became premonitory crop raiders devastating banana plantations, feeding on eucalyptus and sweet potato.

Conservation authorities tasked rangers from the Human Gorilla Conflict Force to chase the group back into the park on an all too regular basis. Management decided that in the best interests of both the animals and villagers’ well-being, the International Gorilla Conservation purchase a 12-Kilometre (7.5 miles) long and 350-meter wide strip of public land along the river to create a buffer zone. The buffer zone would be adjacent to the national park, where planned land usage would not be appealing to the gorillas, encouraging them to remain within the park.

In 2007, there was no Lodge in Nkuringo. Most clients had to drive 36 kilometers (22.4 miles) from Kisoro to Nkuringo that took over one and half hours drive to visit the New Nkuringo Gorilla group – that derived its name from the round forested hill in Bwindi Forest.

“When I visited Nkuringo to see small community Campsite that was run by Family of the now local Leader Asigario Turyegenda, the new Lodge Clouds Mountain Gorilla Lodge was under construction as a partnership with communities surrounding the Nkuringo area supported by USAID, aimed at ensuring the communities benefited from Gorilla Tourism. This was mainly to discourage poaching and encroachment on the Bwindi Impenetrable Forest. We added our voice on this by starting the Nkuringo Walking Safari to give the youth in the community a job but also an opportunity to tell the world about their remote corner that was so beautiful that we wanted more people to see it.” Says Lydia Nandudu, the Co-founder and CEO of Nkuringo Safaris Ltd and Nkuringo Mountain Gorilla Lodge.

“I tracked the Nkuringo Gorilla Group for the first time in 2007 with a group of other travelers. This was a great experience as I met with these giant gentle Gorillas and fell in Love with the Nkuringo family. The walk down to the gorillas was strenuous, and by the time we returned from the trek, I had that satisfaction that I have conquered Bwindi the Impenetrable forest.”

“With our business Nkuringo Bwindi Gorilla Lodge and Nkuringo Walking Safaris, our target was the fit adventurous traveler that was looking for that off-the-beaten-track experience to immerse themselves in the fabric of the rural community with a local guide and Nkuringo Gorilla trekking was always the Icing on the Cake.”

The Nkuringo group became famous for its photographic nature—the gorillas always moved from the thick misty Bwindi Jungle to the Buffer zone, mostly their feeding grounds.

“Trackers would walk down the Kashasha Valley, and there was the most beautiful family of Gorillas waiting. Each tracker returned with the most amazing photos of this group. The Nkuringo Gorilla Group became famous, so did our business get rooted to the company we have become today. We enjoy each day seeing grins on the faces of clients that stay with us at Nkuringo Bwindi Gorilla Lodge as they are filled with joy as they flip through the images of their gorilla trek.” Narrates Lydia.

The Nkuringo Gorilla Group was led by the gentle Silverback named Nkuringo. He led the group till 2012 when he died at the age of 45 years. Nkuringo left the group with 3 Silverbacks, Safari, Rafiki, and Christmas, and the brothers kept together as Safari led the group. Safari disappeared after the gorilla group encountered another family, the Bushaho Gorilla group. Till this day, no one knows what happened to Safari – and that’s when Rafiki took over the family and has gracefully led the group till his demise on June 1, 2020.

Rafiki is a Swahili word that means “friend,” and indeed he was a friendly Gorilla and valued family member; even when his brother Christmas left the group to start his group, at times you would find Christmas return and be part of the Nkuringo group – like that prodigal son, Rafiki always let his brother return home.

The Death of Rafiki Silverback Gorilla—Leader of Nkuringo Gorilla Group

On June 12th, Uganda Wildlife Authority (UWA) released a statement on the death of Rafiki, the lead and only silverback of the Nkuringo group in Bwindi Impenetrable National Park, Uganda. Gorilla Doctors’ post-mortem examination on Rafiki revealed that the likely cause of death resulted from injury from a sharp device/object that penetrated his left upper abdomen and passed through his internal organs. According to UWA’s statement, this injury resulted from a spear, and UWA has arrested four poachers.

On June 1, 2020, UWA trackers reported not seeing silverback Rafiki during their observation of the Nkuringo Gorilla Group. UWA organized a significant search on June 2nd and located Rafiki’s body within a few hours; UWA then notified Gorilla Doctors. Dr. Ricky immediately trekked into the forest with a post-mortem kit to examine the dead silverback.

While conducting a post-mortem examination, Dr. Ricky noted that Rafiki had sustained what appeared to be a sharp-force penetrating wound in the upper left abdomen, piercing part of the stomach wall and large intestine. As UWA announced, the injury was later identified to be caused by a spear and was very likely the cause of death.

“With Covid 19 and ban on Travel Worldwide, we’re saddened to learn that Rafiki has been killed by a poacher that had gone into the park to hunt. With most businesses closed and most people unemployed, we are saddened that the effects of COVID 19 are spreading into the wildlife conservation efforts that have taken a lot of time for us to put in place and to protect these endangered Mountain Gorillas and Wildlife in all Parks.” Lydia adds her voice to the global world concern.

The arrested poacher testified to spearing the Gorilla in self-defense when he came into confrontation with the Silverback. Upon learning of the death of Rafiki, his wife reported him to the authorities, and he confessed to the killing of the gorilla and, together with his accomplices, have been taken into custody.

“We are relieved that Rafiki has received justice and this should serve as an example to other people who kill wildlife. If one person kills wildlife, we all lose, therefore we request every person to support our efforts of conserving wildlife for the present and future generations” To promote our conservation efforts in Nkuringo with Nkuringo Cultural Center, we would like to honor a wildlife officer, Kanyamunyu Fidelis, due to the outstanding work that he has played in the conservation of Bwindi Impenetrable National Park and Earth’s last mountain gorillas.

Fidelis has advocated for the gorilla habituation in Bwindi Impenetrable National Park’s southern sector, thus increasing tourism and their Conservation. He is the Nkuringo Cultural Center director, which advocates for wildlife conservation, thus expanding the relationship between communities and wildlife. He also owns a Biodiversity Conservation Lodge in the middle of our town, which has increased the community’s biodiversity balance.

Nkuringo Safaris Ltd, together with him and other stakeholders, has been at the forefront of advocating for the Batwa to promote their cultural activities in Bwindi impenetrable International Park to make them appreciate and stop wild animal poaching.

During the Covid pandemic lockdown, all travel to the gorilla nation was halted, yet gorilla conservation and security massively depend on the funds from gorilla tracking activities. This left long-term effects on the survival of these endangered gentle giants of Africa.

Amy and Lydia (Nkuringo Safaris CEO) started an initiative towards conserving our cousins, and they appealed to the better nature of primates and wildlife apologists to take action by asking them to donate towards the cause.

At the time, Nkuringo Sector had 44 Staff, including Rangers and guides that supported the Gorilla trekking activity. With no tourism, all rangers, law enforcement officers, and guides were working together in patrol shifts to monitor gorillas and habituate them.

The support we collected from this campaign went towards food for the rangers, guides, and staff that worked with Mountain Gorillas, supplying them with Maize flour, rice, sugar, soap, and G.nuts.

People dug deep and gave rangers heart-full smiles that boosted their workforce till today when visitors can still see the mountain gorillas. Take us through the impenetrable jungles to the gentle giants.

Thank you exceedingly for your generosity and big hearts towards the staff of Nkuringo-Rushaga Sector of Bwindi Impenetrable Forest.

On July 26, 2020, Uganda Wildlife Authority received donations from Nkuringo Safaris to the entire team in Nkuringo—Rushaga Sector in the Southern part of Bwindi Impenetrable National Park. A total of 119 staff (44 Nkuringo and 75 Rushaga Sector) benefited from the donation. Each staff member received 20 kilograms of maize floor (Posho), 10 kilograms Rice, 10 kilograms beans, 5 bars of soap, 4 liters of cooking oil, five sachets of salt, a solar lamp, 2 kilograms of ground nuts, and a pair of gumboots to Nkuringo Rangers.

Here is the message from our director Lydia Nandudu https://mailchi.mp/88ea8710f2b3/thank-you-exceedingly

Gorilla tourism is the best-proven way to support conservation efforts. The number of people employed directly in gorilla tourism and conservation can not be underestimated. These include rangers, porters, guides, drivers, trackers, paper pushers, and all service people in food and lodging. Take a look at what is possible with a packaged gorilla safari in Uganda or Rwanda below. 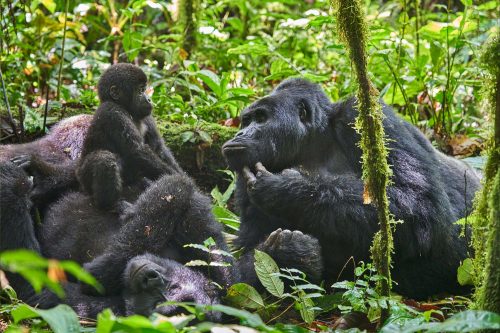 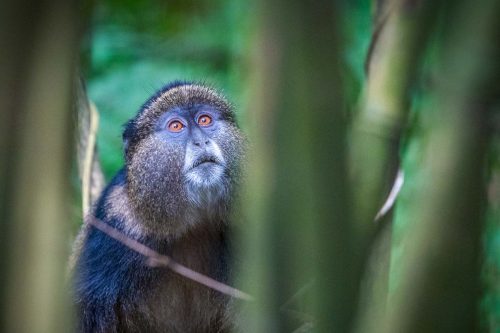 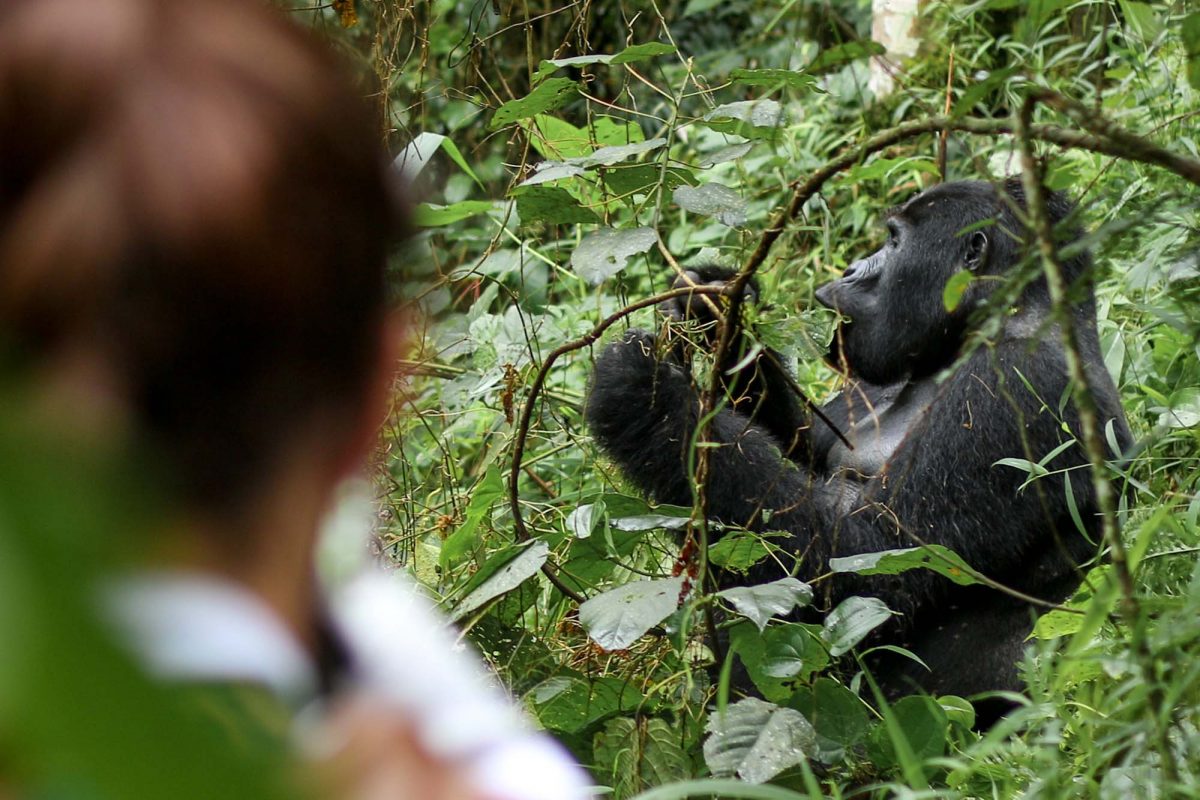 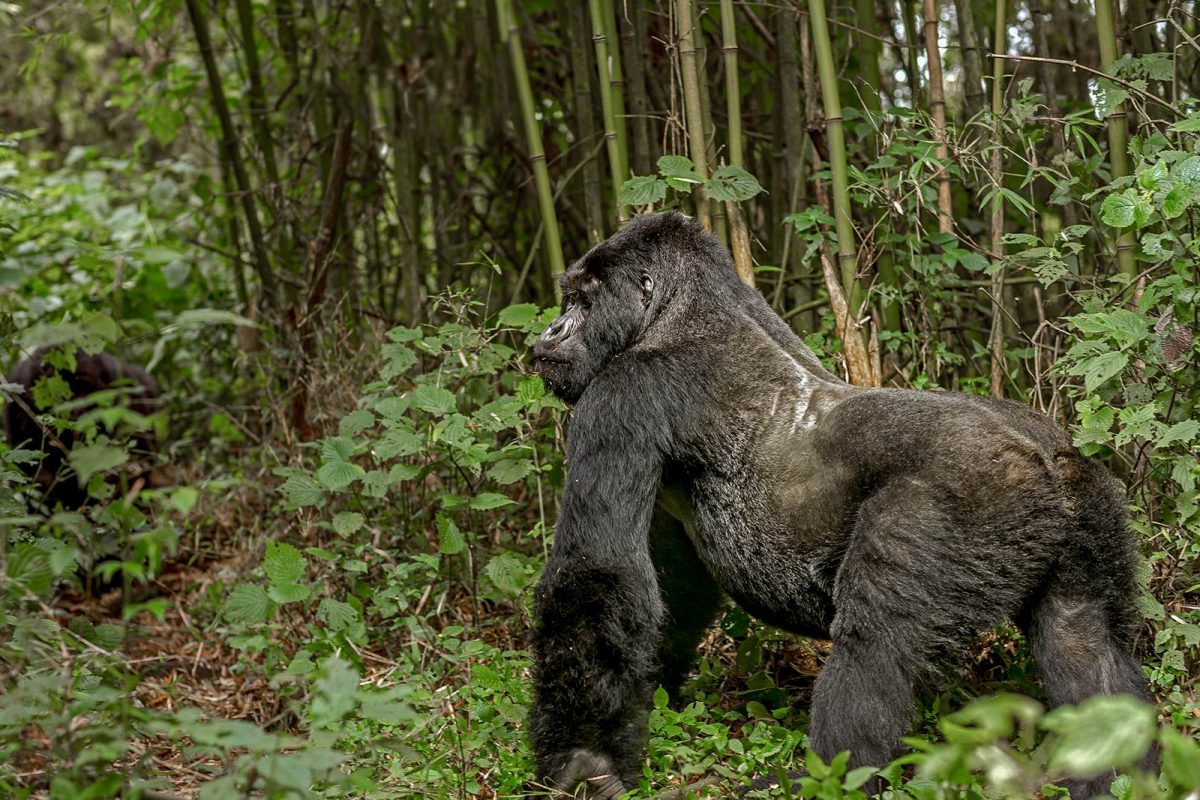 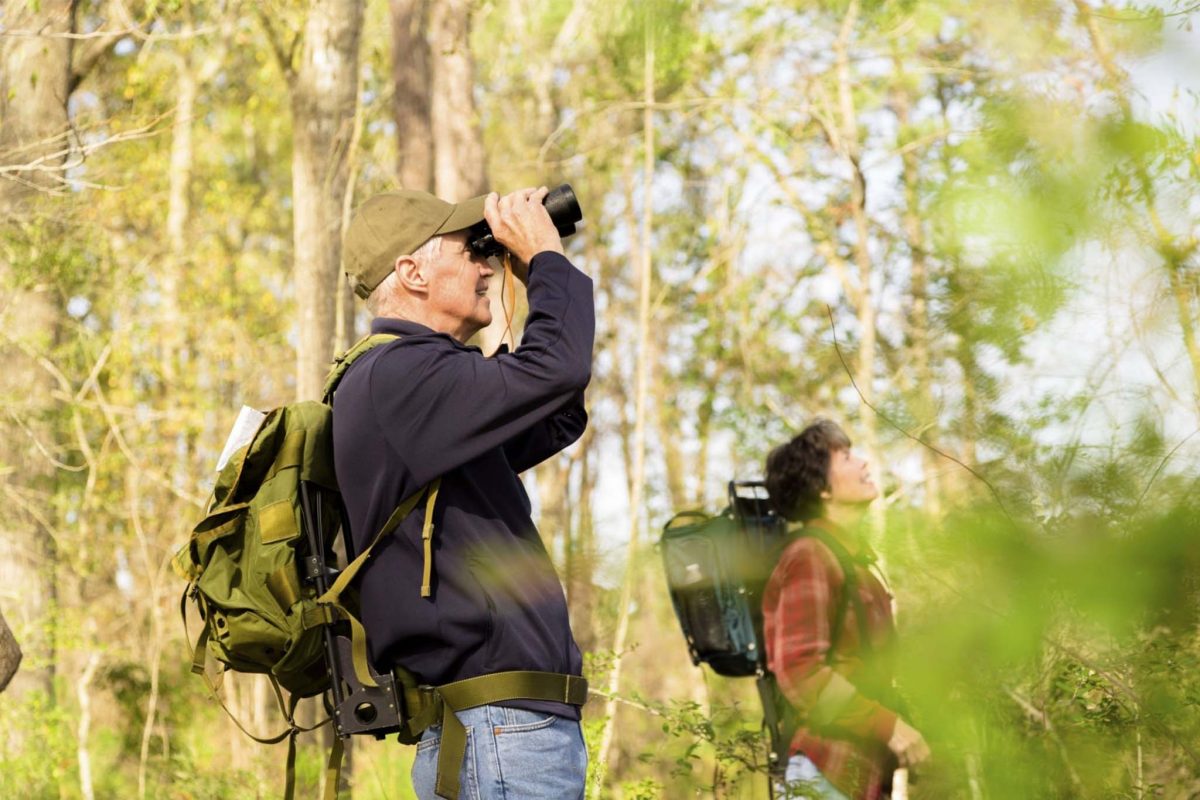 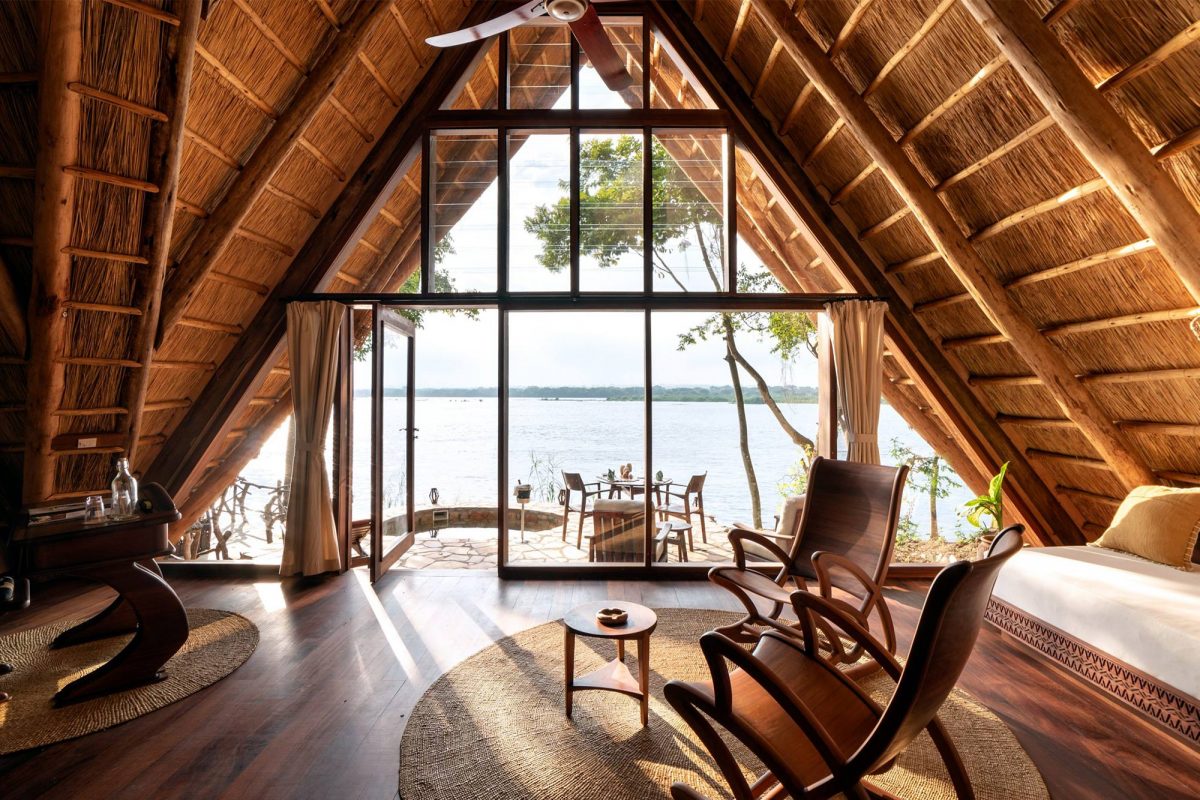 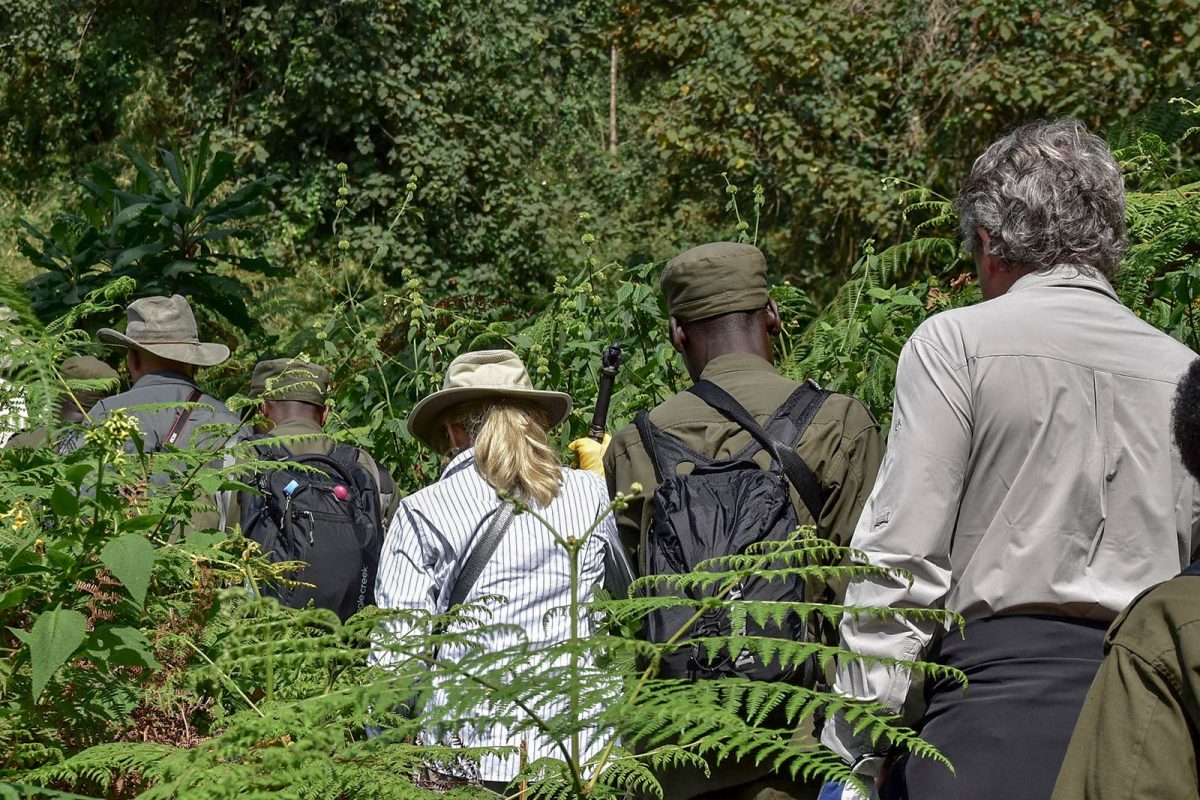