The very name Serengeti is guaranteed to bring a sparkle to even the most spent traveller’s eye. It’s up there in that wish list of mythical destinations alongside Angkor Wat, Machu Picchu, Killarney, Kakadu, and the Great Pyramid of Giza. But what distinguishes Serengeti from all its competitors is its sheer untamed beauty. This Ultimate Serengeti National Park Safari Guide will help you put together a memorable wilderness holiday in Tanzania’s top holiday destination, especially for those planning their first safari.

The Serengeti is a 15,000-square-kilometer (5,791-square-miles) chunk of pristine wilderness; that’s it! The Maasai people named it Serenget, meaning “Endless Plain.”

The primaeval Eden par excellence was named a UNESCO World Heritage Site in 1978 and an International Biosphere Reserve in 1981. The Serengeti is incredibly popular, with travellers filling it to the brim in the high seasons. Despite its crowds, it’s one of the most sought-after places in the world that manages to inspire a wild sense of adventure.

Serengeti National Park‘s ecosystem supports some of the most abundant mammal populations left on earth. The animals here seem stockier and stronger than elsewhere.

Even the squirrels are bigger than their southern neighbours, loping rather than scampering over the tufts and grassy mounds. Leopards and Hyenas are everywhere, and the raptors are in endless motion—tawny kestrels, eagles, harriers, buzzards, kites, and alien-like vultures.

Expect to see at least lonesome animals and then some separated from a large herd—a carcass by the wayside enveloped by stoic, voracious vultures or prowling hyenas. Your first safari in the Serengeti National Park will wow you to the extent of how much you let it.

But let’s put you right in the picture. You’ll probably land at a busy landing strip, maybe near Ntuti, where a dozen open-sided vehicles wait to pick up the new arrivals. When driving around the Serengeti game trucks, you’ll undoubtedly see other four-by-four safari cars, especially around the migration river crossing and big-cat sightings.

As you leave the airstrip, your vehicle will thread through herds of zebra and gazelle. Rufous-tailed weavers, endemic to northern Tanzania, flutter up from the sandy road.

The plains stretch endlessly, with misty mountains muted in the far background. At first, you’ll see trees clutching the plains, but then only an occasional and solitary tree punctuates the golden grass.

Whichever camp you choose for your first safari in the Serengeti, the locals will host you with royalty. The safari camps provide comfortable accommodations and excellent cuisine with a dawn chorus of bubbling birdsong—the whooping hyenas with a backing group of softly calling lions serenading the evening with exotic soundtracks.

What will you remember about the Serengeti?

The bat-eared foxes playing in the early morning sun. Lions galore, in particular, the ones that may wander past your tent and roar like a blazing thunderstorm into the night.

The park hosts many water birds flying around the calm streams, lakes, and rivers. The flat-top acacia trees are the ancient guardians of this windswept wilderness.

The quiet. Ahh, the sound of nothing but everything beautiful! The Big Country. Knowing how small is your place in the interconnectedness of all things. And how privileged you are to be able to experience the wonder of it all.

Click the next link to START planning your first safari with a local expert.

It’s an eight-hour drive (325 km / 202 miles) from Arusha (your gateway airport) to the Serengeti. Although there are places to refuel, breakdown facilities are virtually nonexistent. The roads outside of the cities are mostly dirt, and you’ll have a lot of potholes to contend with on many of them; a 4×4 vehicle would be best if you’re renting a car. Although you can drive to the Serengeti from either Arusha, Lake Manyara, Tarangire, or Ngorongoro Crater, we suggest flying in. Flying to Serengeti is quick, less of a headache, and gives you a sense of the scale of the landscape. There are scheduled and charter flights to the Serengeti from Arusha, Lake Manyara, and Mwanza. The flights are daily. A flight from Arusha to Serengeti South is an hour-long; the flight from Dar es Salaam to Arusha is two hours. Like most tour operators, Nkuringo Safaris will arrange the flights for you, and lodges will surely have someone pick you up at the airstrip.

The best time for your first safari in the Serengeti National Park is in the Dry season (from late June to October). The dry period offers the best viewing of wildlife in Tanzania, with the wildebeest migration as its absolute highlight. Nonetheless, wildlife viewing is good throughout the year. For first-time travellers, the migration timing varies annually, with the best chance of watching the epic animal migration around June to July. You can witness the wildebeest calving from late January to February. Your first safari in Serengeti National Park should last at least at least three days to be assured of seeing the migration on your visit, longer if you’d like to see more interactions with predators.

The best lodges & camps in Serengeti

Nestled on a Grumeti River tributary banks in the western corridor of the Serengeti, Grumeti is a hospitable, delightful Tanzania safari camp that seamlessly mixes rustic safari tents with simple sophistication.

Pros: hot air balloon experiences are a mere 15 minutes away; stellar service from staff and guides; excellent for hippo-viewing as the lodge overlooks the banks of the river. 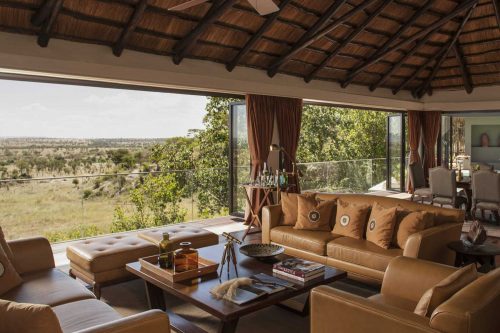 Cons: not for an intimate and traditional safari luxury; views vary depending on the room; game drives and airstrip transfers are not included in all room rates. 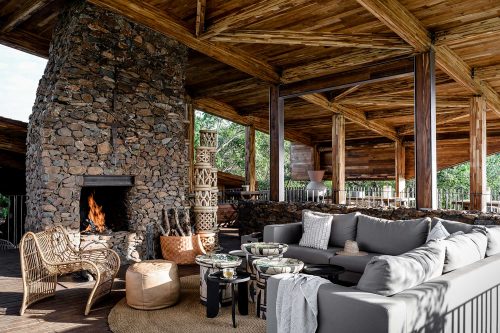 Sprawling but intimate, Faru Faru is a contemporary-styled resort with lots of stone, wood, and sand emphasizing the natural surroundings.

Cons: There can be a horrid smell at the height of migration when, unfortunately, some animals perish in the river.

Built on the crest of the Kuka Hills with 360-degree panoramic views over the Grumeti River valley, this lovely intimate camp prides itself on good service and quality game-viewing along the river.

Pros: excellent service and attention to detail; stunning views from your cottage veranda; a more private and intimate atmosphere.

Cons: Northern Serengeti is a good three-hour drive away; time the unpredictable migration if you want to see it from the concession; airstrip is an hour’s drive, but some may love the additional “safari”. 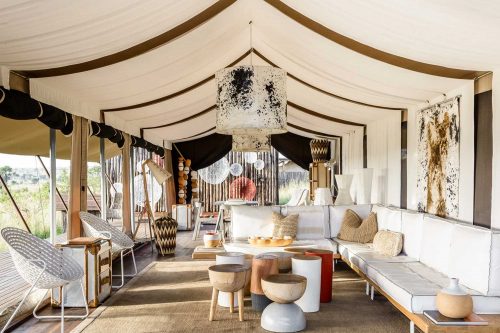 Considered one of the top properties in the Northern Serengeti, the luxurious Mara River Camp has spectacular views over its namesake river and a funky, bohemian, and oh-so-chic style.

Cons: very pricey; when the migration is in full swing, there can be quite a smell emanating from the river due to the massive amounts of wildebeest in the area; not a traditional safari experience, but that’s the allure for some. 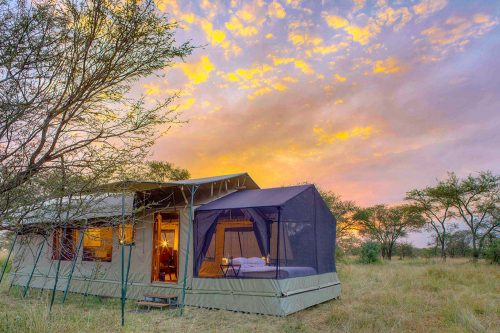 Light, delicate linens, fantastic dining, and touches of romantic Africa scattered around the campsite make Olakira one of the finest mobile camps in the Serengeti National Park.

Pros: Offers open-sided 4×4 safari cars with exceptional guides; fantastic viewing locations, including one near the river for crossings; spacious and stylish tents.

Cons: there might be an odour when the migration crossing is at its peak; no credit card payments in the south camp; group dinners might not be for everyone. 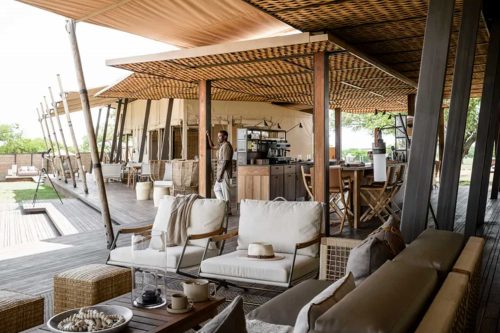 Pros: The camp features wide, open spaces, exquisite details in the tent furnishings, and plenty of activities around the camp, like tennis.

Cons: The camp is not suited for families with children under 12; modern amenities, like a gym tent, might deter those wanting only a bush experience. 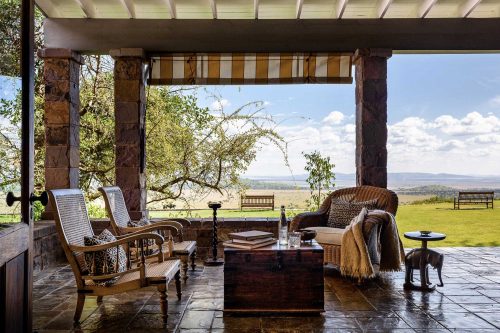 Sasakwa is located in the Grumeti Reserve, a 350,000-acre concession in Serengeti’s Western Corridor. The lodge has a charming 1920s style of the colonial East African farm ranches.

Cons: The lodge is quite formal, but many may not even think that way; luxury and privacy come with a hefty price tag; the odd troupe of monkeys can come somewhat close to the rooms.

Found in northeast Serengeti among the rocky Ndasiata Hills, it’s hard to believe that the accommodation is actually tented because it looks so luxurious.

Cons: camp is about a three-hour trip from Central Serengeti; lots of steps may be a problem for people with mobility issues; slightly larger than other camps.

Situated high on a hill with superb views over the central Serengeti, the two-story thatch cottages are shaped like Masai huts and are set amongst indigenous trees.

Pros: there are great views of the Serengeti from the lodge; the expanse of open plains makes it ideal for hot air ballooning; wildlife often wanders around the lodge.

Cons: larger hotel style and rooms are dated; all food is buffet-style, so when the hotel is full, you may have to wait in line; beware of tsetse flies.

This mobile camp, in the southern part of the Serengeti, follows the migration (usually in March) from an acacia-covered bluff that overlooks a small river.

Cons: bucket showers might not be to everyone’s taste, but it is part of the experience; “mobile” means no guarantee of being in the thick of the migration; the proximity to wildlife might unnerve some people, especially at night. 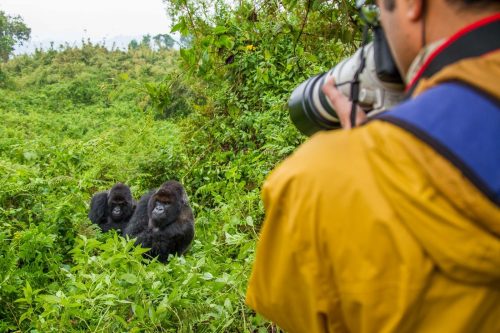 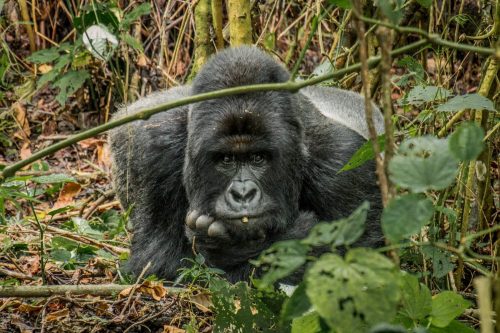 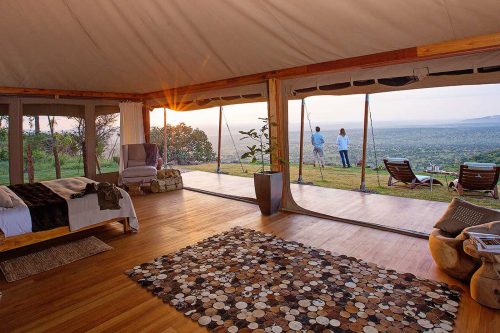